CSG News
The young Chinese segments (18-29 years old) are the most supportive of the three-child policy. 56% are from this segment are in favour of this policy change.

The young Chinese segments (18-29 years old) are the most supportive of the three-child policy. 56% are from this segment are in favour of this policy change.

However, 62% of all Chinese surveyed are not in favour of the three-child policy:

June 18th, 2021, Hong Kong SAR – CSG INTAGE – one of Hong Kong’s leading marketing research firms – has teamed up with DataSpring to conduct a quick poll to determine the sentiments amongst Chinese towards the three-child policy. Interestingly, amongst those in favour of the three-child policy (38% of total adults), younger Chinese 18 to 29 years old are supportive of this policy, compared to older respondents aged 30 to 40 years old. 56% of those in favour are youths compared to adults 30 to 40 years old (44%). (Chart 1).

“The survey reflects the changing values of youth in China. They have grown up with a prosperous China that have grown their GDP on average of 6% – 10% in the last 20 years. The optimism is reflected in their support of this policy. They have very different values and feel very proud about the growth of China. It will be very interesting to see how this new generation will shape the future growth of China. They are definitely an important segment to track in terms of their attitudes and preferences,” said Simon Tye, Executive Director, CSG INTAGE. 62% of Chinese aged 18-40 years old are not in favour of the three-child policy. Achieving the goal of the three-child policy will be a challenge as only 7% are currently considering having 3 children.

76% of Chinese surveyed indicate that they are considering having 1 to 2 children. Only 7% will consider having 3 children. This small minority tend to be from Tier 1 cities with household income above RMB 40,000 per month. (Chart 4) 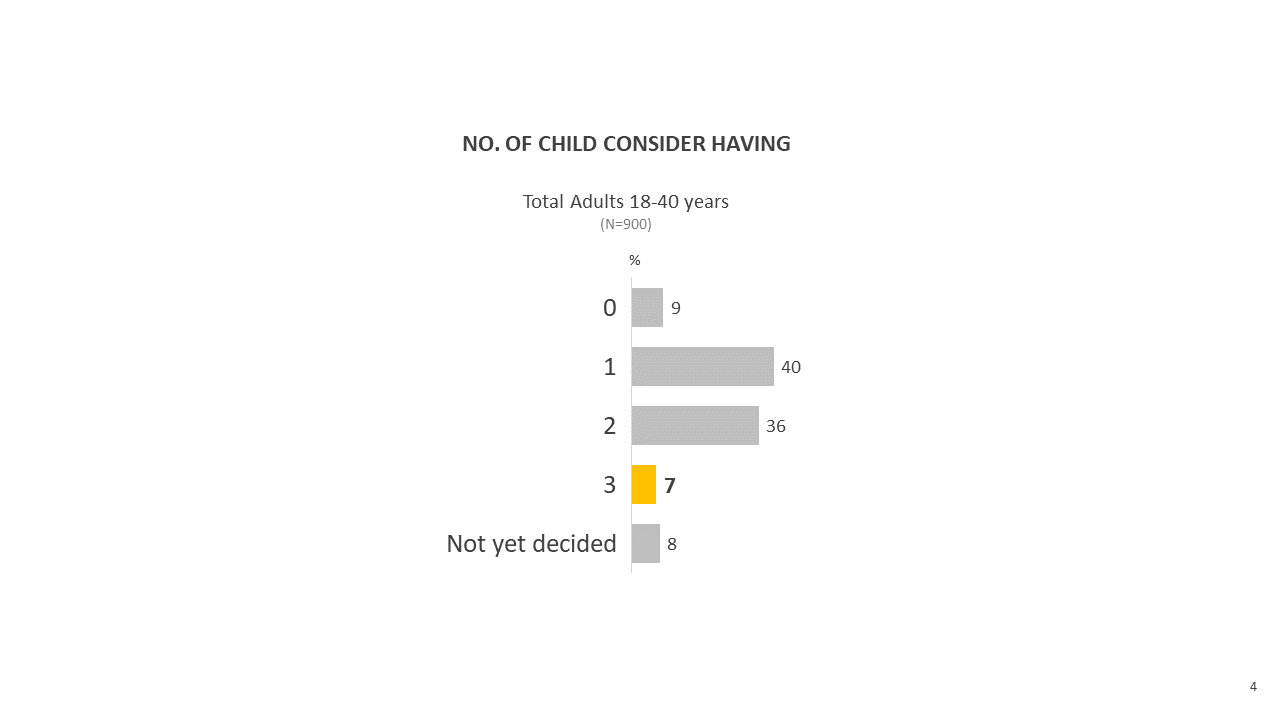 Lack of resources, fear of responsibility and Chinese women’s reluctance to become a full-time homemaker need to be addressed to encourage more support for the policy.

The top 3 barriers to having more children are the high cost of raising children, lacking resources to support the increased needs (e.g. child care) and the perception of the big responsibility in raising 3 children. Among the minority who are considering having 3 children, the factors influencing their decision are the joy of parenting and the desire to support the government policy.

For the minority (7%) who will consider having 3 children, the top 3 factors influencing their decision are providing a perfect environment for children (55%), the joy of parenting (49%) and to show their support for the policy (43%). (Chart 6) The survey was conducted using the online methodology of 900 respondents across different regions and cities in Mainland China in early June 2021. The demographic quota was defined to ensure good representation of the Chinese population segment aged 18-40 years old living in Tier 1 to 3 cities. The questionnaire is 5 minutes in duration.